Autopsy: Ezell Ford Shot in Back at Very Close Range 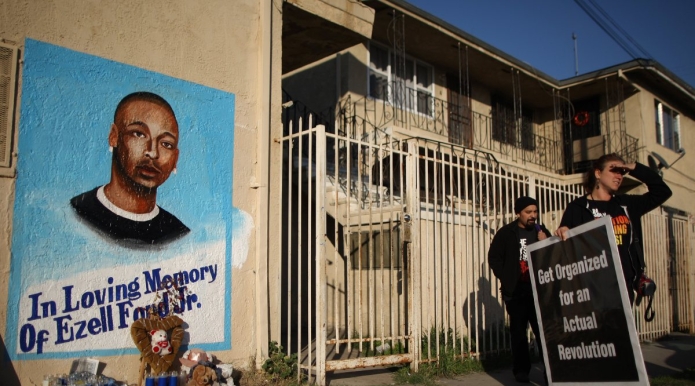 Authorities claim that Ford, 25, was involved in an altercation with two officers and was shot as he struggled with them and attempted to reach for one of their weapons. But, the Los Angeles Times reports, a family friend who saw part of the encounter alleges there was no struggle. Ford was shot once in the right side, once in the right arm and once in the back. The latter wound showed signs of a “muzzle imprint,” the report details, suggesting the gun was fired at a very close range.

Police had asked the coroner’s office to withhold the report […]

My heart goes out to Ezell Ford’s family and friends.

My heart goes out to anyone who has to live in fear that they may be shot in the back by a “bad apple”.

In a country in which over a thousand people are killed by police each year, of whom too many are unarmed children, it becomes hard not to do either of two equally misguided things. One is to get desensitized and forget how valuable each life is–how terrible it is for even 1 person or child to be brutally shot in the back or otherwise needlessly killed. The other is to be too quick to scapegoat a few bad apples or the police. Scapegoating is a cop out (pun unintended) and can lead to things like the senseless, counterproductive violence we have seen recently in the indiscriminate shooting of a handful of cops by angry citizens.

Nietzsche wrote, “He who fights with monsters should be careful lest he thereby become a monster. And if you gaze long enough into an abyss, the abyss will gaze back into you.”

We must take care NOT to meet the onslaught of terrible tragedies, the multiple people like Ezell Ford being killed by police each day, by becoming monsters ourselves. Rather, we must meet it bravely with love, sympathy and thoughtfulness, and a desire to change the system not scapegoat and hate other human beings. When we achieve that, I think it becomes clear to us that the problem is systemic. The problem is not a ‘few bad apples’, and it is not even just the human beings who wear badges; the problem is the system for which they work, a system we are all guilty in our own way of enabling and perpetuating.

What do you think?