A Riot Is The Language Of The Unheard 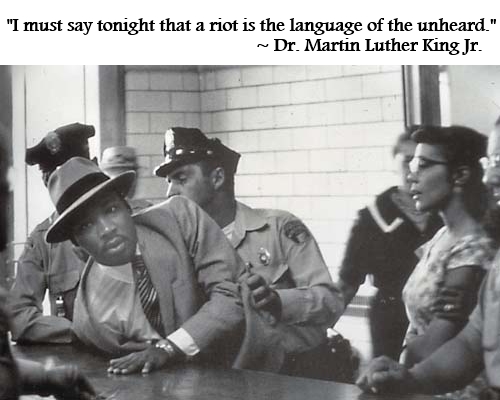 As you surely know, riots have broken out in Baltimore after years of police killing people in America at a rate of over a thousand a year, with many of the victims of police violence being unarmed children, with the deaths most often as a result NOT of efforts to protect people from violent crime but rather to enforce nanny state victimless crimes by attacking non-violent people, namely the war on drugs like marijuana. Indeed, of the millions of disproportionately non-white people shoved in prison or jail, over 90% are there for non-violent crimes. That’s a lot of destroyed families. The string that broke the camel’s back this time was the death of yet another young black man in police custody, Freddie Gray.

There is a lot of commentary about these riots now. The upside to that is that now there is also some more commentary about the much more violence that has been occurring every day, day after day, long before the riots ever started. But rather than add to that commentary I will share the thoughts of a man whose wisdom has stood the test of time, Dr. Martin Luther King Jr.

Now I wanted to say something about the fact that we have lived over these last two or three summers with agony and we have seen our cities going up in flames. And I would be the first to say that I am still committed to militant, powerful, massive, non-violence as the most potent weapon in grappling with the problem from a direct action point of view. I’m absolutely convinced that a riot merely intensifies the fears of the white community while relieving the guilt. And I feel that we must always work with an effective, powerful weapon and method that brings about tangible results.

But it is not enough for me to stand before you tonight and condemn riots. It would be morally irresponsible for me to do that without, at the same time, condemning the contingent, intolerable conditions that exist in our society. These conditions are the things that cause individuals to feel that they have no other alternative than to engage in violent rebellions to get attention. And I must say tonight that a riot is the language of the unheard. And what is it America has failed to hear? It has failed to hear that the plight of the negro poor has worsened over the last twelve or fifteen years. It has failed to hear that the promises of freedom and justice have not been met. And it has failed to hear that large segments of white society are more concerned about tranquility and the status quo than about justice and humanity.

What do you think?